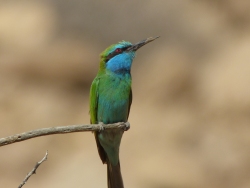 Oman is the most unknown country in the Arabian Peninsula. If any of us take a look in the press or the news, we will hardly listen talk about this nation. In fact, Oman is a really estable, open country (considering its neighbours) and a wonderful place to visit to enjoy some massive birding in the region. Thanks to its geographical situation, Oman has been a natural crossroad for thousands of years, becoming a meeting point for bird species coming from really diferent geographical areas.

Winter is the best time to enjoy this variety of birds. This is when it is possible to enjoy overwintering birds from Eastern Europe but also from the vast area of Central Asia, Iran, Pakistan and Indian subcontinent. In the South, this variety of birdlife mixes with a selected group of species typical from the Horn of Africa, giving the sense of being in that continent. Along with them, a good variety of regionals as interesting as Yemen Serin, Jouain’s Petrel or Arabian Wheatear and mythical desert birds including the enigmathical Grey Hypocolius.

Barcelona Birding Point offers a tour every year to the country starting in the second half of January or early February, depending on the year.

General Information of the tour:

Read the trip report of our last tour to Oman

Please be aware that final price can vary in the moment of your booking depending on the aerial tariff.

Day 0. During the day all tour participants will fly into Muscat for an evening, welcome meal in a previously selected hotel in Muscat.

Day 1. First birding of the tour. Morning birding in Al Qurm Park and other natural sites in the city. The list can include birds as good as Marsh Sandpiper, Clamourous Reed Warbler, Indian Roller, Red-tailed Shrike, Purple Sunbird, Indian Pond Heron, Indian Silverbill, Greater Crested & Lesser Crested Terns, Palla’s Gull, Oriental Honey-Buzzard, Red-vented Bulbul and Grey Francolin among many other. We will spend the afternoon in the massive mountains & cliffs at the background of Muscat. Here we will look for Hume’s & Red-tailed Wheatears, Plain Leaf Warbler, Striolated Bunting as well as Egyptian & Lappet-faced Vulture. Here is also a place to look for the Palestine Rock Pigeon, a real wild race of the urban Feral Pigeon. Despite all of this, the main attraction of the area will be to look for the recently discovered Omani Owl, a poorly known bird inhabitating these mountains.

Winter plomaged Palla’s Gull (Ichthyaetus ichthyaetus) in the Arabian Sea during our last tour to Oman. Image by Carles Oliver

Day 2. Morning birding in Al Ansab Lagoons, one of the best locations to try to see the scarce White-tailed Lapwing along with a good variety of wildfowl including Greater Flamingoes, Ruff, Western Reed Egret and many more. Driving West we will explore different areas with good chances for Namaqua Dove, Hume’s Whitethroat, Isabelline Wheatear and Arabian Babbler. In the afternoon we will explore the mangroves near Al Liwa, where we will look for the endemic kalbaensis race of Collared Kingfisher, a highly endangered potential split.

Day 3. Early morning birding in Muscat before transferint South. We will spend some hours exploring the highlands of the Al Hajar mountains looking for Lappet-faced Vulture, Eversmann’s Redstart, Rufous-tailed Rock Thrush, Hume’s & Variable Wheatears and Streaked Scrub Robin. The slopes provide awesome views on the impressive geology of the mountains while driving up the lanes. In the afternoon, transfer to our accommodation in Duqm with a stop to enjoy a good variety of waders in our first exploring of a sea mudflat.

Day 4. From Duqm,  we will explore the coastline, where massive intermareal flatlands host a wonderful variety of waders. Here we will look for a wide variety of waders including Lesser & Greater Sand Plovers but also Broad-billed Sandpiper, Kentish Plover, Great Knot and the wonderful Crab Plovers. The area is famous for hosting about 1 million waders in winter! Along with them we may enjoy other birds including Sooty, Steppe, Slender-billed, Heuglin’s & Caspian Gulls, White-checkeed Tern and several more. Arrival to Dqum for a two nights stay. In our way we will already have firsts chances for desert birds including Desert Wheatear, Southern Grey Shrike (aucheri), Brown-necked Raven or Black-crowned Sparrow Lark among other.

Day 5. This day we will drive South from Duqm to Salalah. During the morning we will explore areas for desert like birds including Greater Hoopoe Lark, Cream-coloured Courser, Desert Wheatear, Chestnut-bellied Sandgrouse and Asian Desert Warbler. Once arrived close to Salalah we will spend the afternoon in a forested valley. Here we will have a first contact with the wonderful Dhoffar Massif. The area, carpeted with deciduous trees, is home for a number of top target birds. Here we will look for Cinnamon-breasted Bunting, Abyssinian White-eye, African Paradise Flycatcher, Blackstart, African Silverbill, Palestine & Shining Sunbirds and Arabian Warbler. Here we will also check the sky as Verreaux’s or Golden Eagles are both possible. Black-crowned Tchagra, Arabian Partridge and Arabian Golden-winged Grosbeak are all possibilities here!

Grey Hypocolius (Hypocolius ampelinus) female in the Omani desert during one of our tours. Image by Carles Oliver

Day 6. Today we will explore the Raysut area. This area had become famous due to the huge amount of raptors that overwinter here. There are literally hundreds and hundreds of Steppe Eagles that mainly feed in the rubbish dump providing wonderful looks as they keep moving around the area in small flocks of tens of birds. Along with them we will look for Greater Spotted Eagles and Eastern Imperial Eagles, also present but is smaller numbers. The area is also hosting an overwintering population of Abdim’s Stork, and Black-eared Kites may be also seen. During the day we will also explore a number of lagoons and estuaries close to the city. Here, a massive number of species can be expected including good chances for Citrine Wagtail, Rüppell’s Weaver, Pheasant-tailed Jacana, Temminck’s Stint, Intermediate Egret, Cotton Pygmy Goose, Indian Pond Heron, White-winged Black Tern, Terek’s Sandpiper, Saunder’s Tern, Western Osprey, Pacific Golden Plover among other species. If lucky, we may have scarcer species here including Yellow Bittern, African Sacred Ibis or one of the few Long-toed Stint, White-breasted Waterhen or Pin-tailed Snipes overwintering here.

Day 7. This day we will drive up to the Dhoffar Massif. Here we will spend the morning looking for Yemen Serin, one of the most scarce birds in the region. The landscape around is also great for other birds including Singing Bush Lark, Long-billed Pipit, Cinnamon-breasted Bunting, Tristam’s Starting but also Arabian & Hooded Wheatears. Raptors are a common view here and we may have Montagu’s Harrier, Short-toed Snake Eagle but also Eurasian Griffon Vulture, Eastern Imperial Eagle or Bonelli’s Eagle flying around! Later in the morning we will explore some cliffs hosting Verreaux’s Eagle and Tristam’s Starling as well as having a wonderful view over the Salalah Plain! Late in the afternoon we will go for some urban birding in Salalah. Here we may have Indian Pond Heron, Citrine Wagtail and Isabelline Wheatear but also Spotted Thick-knee and Bruce’s Green Pigeon!

Day 8. Early morning start to go catch up with a offshore trip out of Salalah. During the trip we expect to have good views on some really interesting species including the endemic Socrota’s Cormorant, Jouain’s Petrel and Persian Shearwater. Masked Booby, Red-billed Thropicbird and Red-necked Phalarope are all possible! The offshore is also providing with good chances for Green Sea Turtle and groups of Indo-Pacific Bottlenose Dolphins at close range. In the afternoon we will drive North to explore some rocky scarpments looking the the very scarce Desert Owl. Along with it we may have other interesting birds such as Arabian Wheatear or Striolated Bunting.

Day 9. Early morning start and transfer to the desert to explore a number of oases. There we will look for the iconical Grey Hypocolius along with other really interesting birds including Chestnut-bellied & Spotted Sandgrouses, Nile Valley Sunbird, African Collared Dove and Blackstart. Grey Hypocolius is an overwintering visitor to the area with small numbers visiting Oman in winter. During the day we will also explore a number of fern ferms in the desert, likely to attrack a good variety of birds in winter but, since crops tend to be abandoned after few years (the soil is poor), these locations tend to be highly variable. Species such as Pied Wheatear or Tawny Pipit are likely. After some rest in our accommodation we will go for a nocturnal trip to look for Arabian Scops Owl close to Salalah. 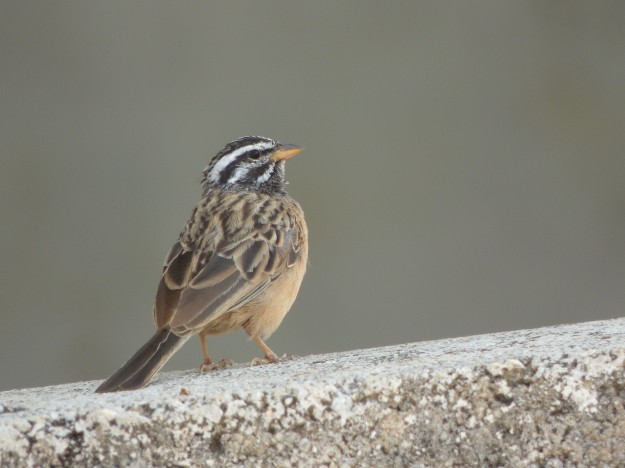 Day 10. Morning birding around Salalah. We will spend some time in the formerly excellent fern ferms in the town. In the past, they used to attrack Demoiselle Cranes and Sociable Plovers along with other goodies. Today, they seem less attractive for any good bird. Still, Singing Bush Larks and Yellow-billed Kites are still possible there. We will also explore nearby areas looking for Arabian Golden-winged Grosbeak. Grey-headed Kingfisher & Namaqua Dove are also likely there. Midday flight from Salalah back to Musqat, arrival to the our accommodation in the capital city and eventually some birding in the afternoon before ending our tour with dinner at our accommodation!

Day 11. Morning transfers to the airport to start the way back home for all tour participants (please remember that flights are not included in the price).

Please note that this tour is run by Barcelona Birding Point, a full-licensed tour company based in Barcelona, offering tours since 2010 Read more about us

Additional Information of this tour

WHAT’S INCLUDED
10 nights of accommodation in twin/double room, breakfasts, lunches and evening meals, birding guides, ground transport, boat tickets, reserve entrances/fees and travel insurace, internal flight Salalah/Musqat.
NOT INCLUDED
Flight tickets to Muspat / from Musqat. Alcoholic and soft drinks are not included, any other item not listed as “INCLUDED”
ASSEMBLING
Tour participants will assemble in Musqat Carnelian by Glory Hotels for an evening meal.
ACCOMMODATION
Only 3 accommodations expected along the itinerary. Carnelian by Glory Hotels (3 nights). Hotel in Duqm: Duqm City Hotel. Hotel in Salalah: Musqat International Hotel Plaza. Evening meals expected always in the accommodation.
WEATHER
Weather in the coast (Northern and Southern) will be pleasant, expecting 25ºC with fresh morning and late afternoons. As soon as going inland temperature will be higher and we will try to avoid central hours of the day in any real desert.

For further information and bookings please mail to; info@barcelonabirdingpoint.com 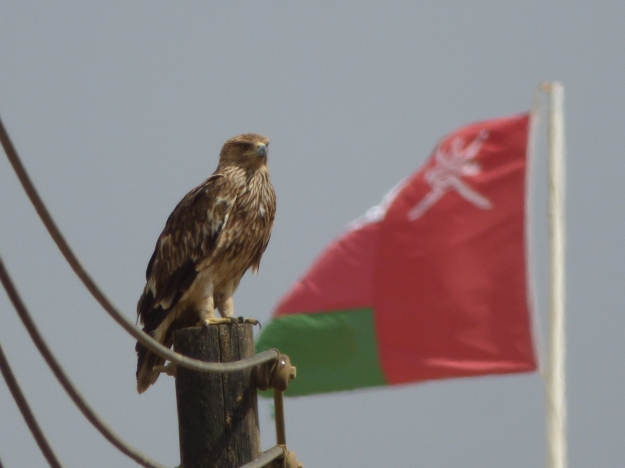